You can find copper ware in diverse designs and forms, and there are thick- and thin-walled kitchen products – braising pots, simmering and frying pans, fish and meat pots, which can be purchased as a copper dish. The special characteristic about these dishes is their robust material, regardless of the form. In addition, copper ware is characterised by its heat resistance, easy maintenance and the more intense flavour of the food that is prepared in them. 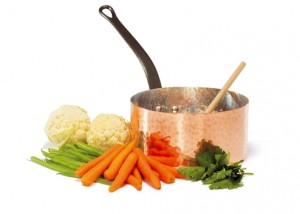 With respect to the material it should also be noted that the manufacturers usually use handles made out of cast iron for their copper ware, which in turn increases the quality of these products. Copper dishes that are suitable for all cooktops are especially popular, as you do not have to worry about potential damage from heat. Even in restaurants they are often used. Suitable for service are mostly thin-walled copper pots, as these can be carried more easily due to the lower weight. For cooking, however, especially but not solely on a professional level, the manufacturers recommend thick-walled copper utensils.

There are many recipes that are suitable for cooking in a copper pot. These are by far not only for hot food, but also for sweets like marmalade, for which there are special copper pots. They can of course be used to create different varieties of marmalade, whether strawberry, raspberry or apricot. Also, for baking cakes and the like, copper ware is wonderful.

Since the dishes made from this material are mainly used for braising, recipes for which this method of preparation is important are particularly popular. These include some of the French cuisine like “Ratatouille” or “Coq au vin”, which are popular dishes, partly also due to the movies that bear their names and that were real blockbusters.

A very exotic French dish, also referring to a movie respectively a comic book, is the “Tipsy Obelix”, which can be prepared with copper pots wonderfully. “Tipsy Obelix” consists of the haunch of a wild boar, which is detached from the bone. For the preparation you need among other things the wild boar meat, onions, red wine, thyme, laurel leaves and sour cream. Also popular are Provencal stew, beef pot Corsican, which is called “Stufatu” by the locals on the Mediterranean island, and Chateaubriand with red wine sauce. For the latter the oven is preheated long, but due to the copper material this no problem for the dishes.