Romefort trading Ltd.
2017-04-30 09:19:42 2013-05-19 15:39:0019.05.2013 15:39
Nowadays, Germany's cuisine is well-established and widely-known throughout the world, even though it may appear different in some households. The times in which the family gathers around the richly set table seem to be long gone. The role model of the traditional housewife, who serves the well-cooked roast, is no longer what it used to be. Instead, modern singles live a flexible and fast moving daily life in which food culture has virtually no place. Today, everyone buys their lunch spontaneously and meets their colleagues after work for dinner at a restaurant.
However, in German cities there are also insides' tips for insiders' kitchens where people who enjoy cooking invite others to cook for them, hoping for a small donation in return. This idea originated in Cuba, a country, where poor people joined up for meals but these "clubs" are nowadays established in many European cities. Here in Germany, meals have to be technically perfect in order to be considered as marvelous. Of course, that also requires excellent kitchen equipment: be it copper cookware, gas cooker or butcher block made of end-grain common hornbeam wood - the perfect equipment makes cooking much easier. Anyone who has ever tried to cook a lavish menu knows that this is true. 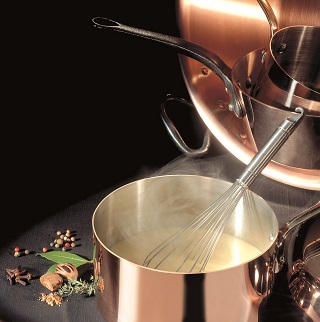 When people are established in their jobs and have both feet on the ground, they realize that a happy and fulfilled life involves more than simply going to work and eating a ready-made meal in front of the TV in the evening. This desire whets their appetite for learning how to cook properly. Movements such as Slow Food have also contributed to the fact that more people are interested in what they eat. These people consider it important to buy only food of high-quality for their meals. The excuse that the butcher does not sell good meat or that high-quality ingredients are not available anymore does no longer count. There are still nice things to put into pots and pans - you only have to look for them and avoid settling for second quality.
Nowadays, there are guides who tell you which restaurants and food manufacturers place great importance on the regional food culture and use fresh ingredients in line with the respective seasons. Good and enjoyable food does not mean that it has to be expensive; more often than not it's the other way round. But it is advisable to spend a little bit more for food than only eleven per cent of the salary, which is the German average. Be it bread without additives and flavor enhancers, good regional wine or old and rare sorts of beer: An increasing number of people places more importance on enjoyment and chooses products with which they can cook even tastier meals.
In the last fifty years, the German food culture has considerably changed: there are much more new products now and even in the remote countryside, people are able to buy many exotic fruits and spices. Those who start cooking more regularly and use different sorts of curry will discover what "haute cuisine" truly means. However, there is also an adverse development nowadays: in too many German households, people only cook very rarely or not at all anymore. They buy ready-made meals, put them into the microwave and eat them shortly afterwards. This is a step backwards in the cultural development of the cuisine. However, the scandals in the food industry also show that crime has something to do with it: ruthless wheeler-dealers simply want to make more profit. Fortunately, there is more of a tendency towards better food and healthier diets. Increasingly more small farmers strive for better quality. Even in the gastronomy and at wineries, there is a change of generation, as can be seen in the Black Forest, for example. It is, of course, still possible to eat as poorly as in other regions but many old and young chefs have already reached the level of haute cuisine and there are, in addition, many good cheese manufacturers.
When it comes to cooking, the Germans are very good at copying: that is not a negative but a rather wonderful thing and brings the variety of the international cuisine into German provinces. And since the French lifestyle is so admirable thanks to its positive attributes of easiness and enjoyment, it has increasingly more devotees.
Table culture