Copper pots and pans from France – much more than decoration!

A while ago, I saw a picture of a kitchen I liked very much in an interior design magazine. The furniture was cottage style, and hanging from several hooks on the walls as well as standing in various open cupboards was an assembly of beautifully polished copper pots and pans. The warm glow of the copper seemed to reflect onto the whole room and gave it a homely atmosphere. 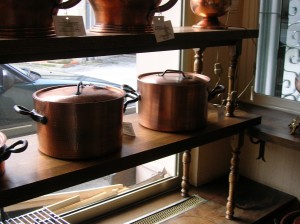 The article stated that the picture had been taken inside a 200 years old farmhouse in the countryside of France, and I was reminded of that picture the next time my travels took me to France again and I visited my friend Mireille, the owner of a restaurant near Paris. It had been just recently redecorated in a wonderfully traditional and slightly rustic style, and I could not help but smile when I recognized several items of old-fashioned copper kitchen ware that had been strategically placed all about the room. There were some copper pots and pans and even a large cauldron in one corner. I could very well imagine to be somewhere on an old farm in the country instead of the urbane capital of France!

“I so need to take some copper pots and pans back home to put on my own walls!” I told Mireille. “This just looks phantastic!”

Mireille thanked me and seemed to like my idea of such souvenirs from France. “Of course”, she added with a smirk, “copper pots and pans DO HAPPEN to be very useful, too, when it comes to actually USING them for COOKING.”

“Mhm…” I pictured the beautiful old copperware in the chaos of my own kitchen during one of my relatively feeble attempts at higher cooking. “I’d just spoil them. They’d get crusted with burnt sauce and all that. That would be such a waste!”

“A waste!?” My friend, now all French Chef, took me with her into the kitchen, where several people were bustling around, busy with meat, sauces, soup and stews and all kinds of food. And I saw… copper! Copper skillets, copper pots and pans, big ones, small ones… very modern versions of copperware, too, a far cry from the old-fashioned decoration I had seen before. “Wow! Did you buy half the copper kitchenware of France, or what?” 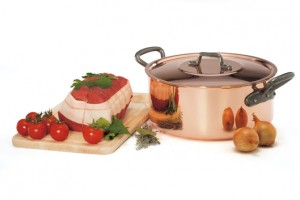 “Well, some part of it at least,” she smiled. “Just like many other people who enjoy cooking, professionals as well as amateurs. Copper is a great material for cookware – a very good heat conductor, and it can actually help you to save energy. Some of them come with a special coating, so the food doesn’t stick to the bottom. They have even started producing special lines for induction cookers.”

So, she obviously was a huge fan of copper, and not only for decoration. I think I am becoming one now myself, especially since she later invited me to her home kitchen, where we cooked dinner together, of course with her personal copper pots and pans and casseroles. We went shopping the following day, and I brought some really nice copper items for my own kitchen back from my trip to France – and only very few of them will be for decoration only – that is for sure!