When it comes to cooking, copper kitchenware is not only a traditional but still much preferred choice, for example copper pots by the award-winning company “de Buyer”.

Professional chefs as well as hobby cooks like to use pots and pans made of copper because (among others) of the great heat conductivity of the material – and last not least because of its beauty. Many modern kitchens, though, meanwhile include stoves that are based on induction. Induction stoves work with alternating electromagnetic fields. The top of such an induction stove consists of a special glass-ceramic material. This top covers an inductor. Electricity flows through this inductor and thus creates the alternating electromagnetic field. A metal pot above such a field gets heated up – but not every metal pot is equally suited for cooking on such a stove. Regular copper pots for example are not suitable. 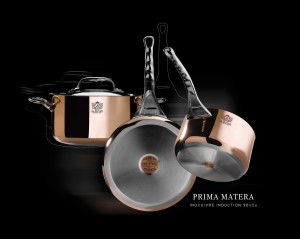